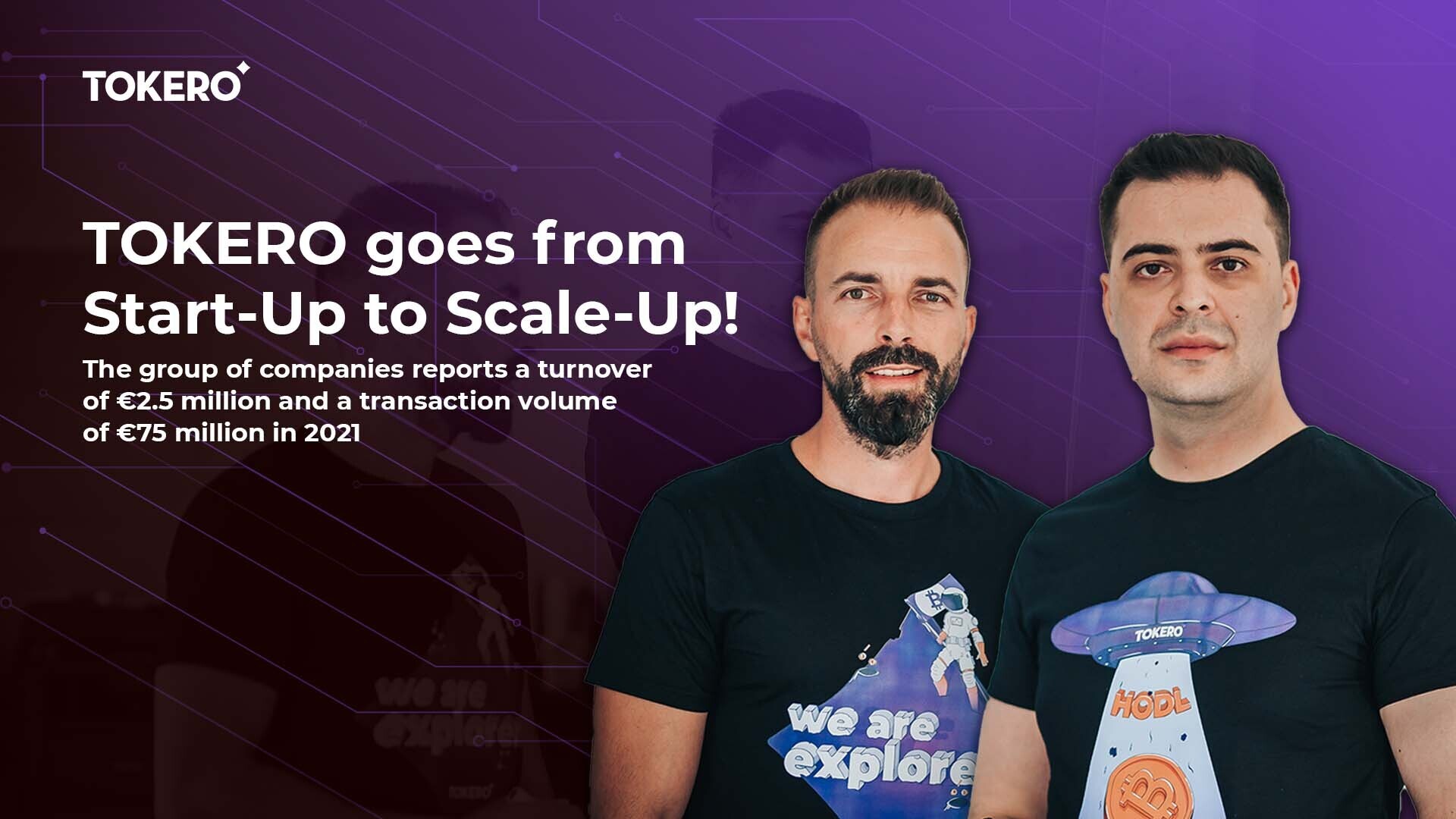 TOKERO goes from Start-Up to Scale-Up!

The group of companies reports a turnover of €2.5 million and a transaction volume of €75 million in 2021

The Route from Start-Up to Scale-Up

Five years ago, cryptocurrencies were not so well known in Romania, as the whole industry was still in its early stages. However, in 2017, two Romanian entrepreneurs saw the opportunity of this market and envisaged to open it to the general public. Marius Morra and Sabin Simionescu aimed, at that time, to develop a company in the Romanian cryptocurrency market and to reduce the perceived shortcomings of potential customers and investors through easy access solutions to this new class of financial assets.

Therefore, in March 2018, the platform called www.ldvbank.com was released, which subsequently went through a relaunch in March 2019, thanks to the first pivot on the business model. That first release was a source of business lessons in this untapped cryptocurrency niche, and at the startup level, pivots on the business are an expected part of the learning and development process. In March 2019, the expansion of LDV Bank started both in terms of number of customers and volumes traded, but also in terms of new functionalities offered to users. The following years highlighted a continuous brand, product and team development, leading to the successful completion of the first round of funding and rebranding into TOKERO Crypto Exchange in May 2021.


Financial reporting for 2021: Romanian cryptocurrency exchange TOKERO ended the year with a turnover of €2.5 million, traded volumes of €75 million and a valuation of €15 million.

TOKERO is experiencing some of the most spectacular growth in the Romanian cryptocurrency market, both financially and operationally, as a product and as a team. If in 2019, the company had a portfolio of only 5.5 thousand customers, by the end of 2021 TOKERO reached 30.1 thousand customers, increasing more than five times within this period. As a result of the friendly interface, the users are confident to trade on the platform, and this can be observed from the total volume of transactions reported, of €75 million at the end of 2021.

As of mid-2021, TOKERO has launched a new business segment, appreciated by users of the cryptocurrency platform. Specifically, from September TOKERO has started listing new projects as launchpads*. This innovation has reinforced the idea that TOKERO is the right choice for anyone who is a cryptocurrency enthusiast, but it has also generated significant revenues of €1.5 million and contributed to the increase in the number of customers on the exchange segment. For two of the listed projects, Humans.AI and BH.Network, TOKERO managed to raise funds of 1 million USDT each in just a few days (USDT - stablecoin at 1:1 parity with the US dollar).

As a result of the services it offers, TOKERO ended 2021 with a consolidated group turnover (Globe Monnaie SRL – exchange, and LDV Tech SRL – launchpad) of about €2.5 million, 125 times higher compared to the turnover of €20,000 recorded in 2019.

According to the two founders, it's all thanks to the team behind the scenes, the most important component of the business. The team has expanded considerably in just one year, from 5 members in 2020 to more than 21 specialists in 2021, half of them allocated to the operational area (support, marketing and compliance) and half in the IT department.

Along with the establishment of the new office in Bucharest, in the Hermes Business Campus office complex, also arose www.TOKERO.Team – an ongoing recruitment programme for the TOKERO Group. The aim of developing and launching the recruitment platform is to attract new talents to the team, both people with crypto knowledge and people who are highly trained in their fields, who seek premium professional opportunities and new challenges. Starting in August, those interested in applying their knowledge in crypto as well are invited to submit their CVs on the www.tokero.team platform. The initial positions will be open on HR, accounting, marketing, IT, management.


What are the future plans for the TOKERO exchange founders?

Marius Morra, one of the youngest entrepreneurs in Crypto and Blockchain, is the CEO and Co-Founder of TOKERO. Backed by more than 14 years of experience in entrepreneurship and business consulting, he founded the technology startup LDV Exchange, now rebranded as TOKERO Crypto Exchange, along with Sabin Simionescu. “We are currently working on the development of new TOKERO branded products to complement what we intend to call the "TOKERO ecosystem". We are preparing a launch that is highly anticipated by our community: The TOKERO TOKEN Launch – an utility token developed after $BNB from Binance, $CRO from Crypto.com combined with $POLS, the native token of the Polkastarter launchpad. The entire TOKERO ecosystem will be built around the token, which will include several services and benefits, the first ones already active, exchange, launchpad and TOKERO PRO”, declares Marius Morra.

Sabin Simionescu, one of the top software developers in Romania, with extensive experience in Web, Crypto and Blockchain, is the Chief Technology Officer (CTO) and Co-Founder of TOKERO. He is the one who created the first 3 versions of the cryptocurrency exchange platform. To ensure the success of the project, he has also specialized in fields such as accounting, marketing and law, so that he has a view as clear as possible of the entire Crypto field, business and market. Sabin Simionescu declares: “Platform-wise, the technical team is now very focused on the final touches of a new, much more scalable version (Version 4.0) that can support all TOKERO products, currently in various stages of development/planning. There are major improvements to the mobile app as well, soon to be released. And something all customers want to know - yes, we will be introducing new coins, lots of them. We have blockchain integrations in development that will make many more currencies available for exchange, enabling us to become a leader in diversity as well. We are currently at the beginning of our second round of funding, there are investors waiting already after the first round. TOKERO's history speaks for itself, we've been in the market for 5 years, we're continuously developing new solutions, growing, and daily bringing crypto closer to mass adoption.”

The second round of funding is an open round this time, compared to the first one, which was a closed round. "We aim to raise €1.5 million, out of which half is already secured. We’re now publicly announcing the round because we want to attract investors from outside our community as well, we will have for sure pleasant surprises," Marius Morra justifies.


Some notable facts about TOKERO: